Every two years, the MDS Foundation holds an international symposium where doctors and researchers who work to improve the opportunities for patients with MDS meet for 2½ days to present the latest research results and discuss the diagnosis and treatment of the disease under the heading «Advancing Research and Patient Care». The symposium was announced with the picture here, but during the 2½ days there was not much time to look at Copenhagen despite the fact that one of the main forces of the Danish organization committee chief physician Kirsten Grønbæk from the Clinic for Blood Diseases at Rigshospitalet in the opening speech strongly urged the foreign guests to have a look at Copenhagen and North Zealand and pointing at a dozen places, which you definitely needed see before traveling home.

The symposium was opened on Wednesday evening with a welcome speech by chief physician Kirsten Grønbæk and a keynote lecture entitled «The origins and evolution of MDS” by Dr. Benjamin Ebert, professor at Harvard Medical School. This lecture, together with all the other presentations at the symposium, will be available as video on the MDS Foundation’s website www.mds-foundation.org.

IMPORTANT NOTE: The following is an MDS patient’s reflections on participating in the symposium, and may contain misunderstandings and expressions not medically correct. I am not a doctor, just a patient attempting to understand the disease better.

The official program had a lectures on Thursday from 8 am to 5 pm, Friday again from 8 am to 5:30 pm and Saturday from again from 8 am until noon. Every day was half an hour with the expert (Meet the Expert) within different specialties before the official programme. Thursday morning I heard Dr. Casey O’Connel talk about clinical experience with immune checkpoint inhibitors, and on Friday morning I heard Dr. Brigitte Schlegelberger talk about “Genetic counseling in MDS – What do I tell my patient?”. Dr. Casey O’Connel gave an overview of which drugs were tested and examples of treatment with these drugs giving longer periods of stable disease, yet failing to meet the criteria of the international working group. Dr. Brigitte Schlegelberger dealt with the dilemma of using the latest gene sequencing technology, where the result can tell about hereditary predisposition to various serious diseases, but not say anything about whether the patient will develop the disease in question at all.

A review of all twelve sessions will be long and probably boring for most readers, so I just want to tell you about lectures that I found particularly interesting, and otherwise refer to the videos on the MDS Foundation website.

Bridge between discovery and treatment

As part of Saturday’s program, Dr. David Steensma from Harvard Medical School, gave a keynote titled «Bridging the Canyon between Discovery and Therapy”, in which he talked about the progress made in understanding the MDS disease, without any progress in the treatment of the disease. In fact, we need to go back to the zeros to find the latest approved treatment for MDS. Within the related disease AML, four new drugs were approved in 2018. However, there is some hope that the drug Luspatercept will be approved for the treatment of low risk MDS already this year.

MDS Alliance had patient representatives from Danmark, France, Germany and Great Britain at MDS 2919, and MDS Alliance also had a booth there to inform participating doctors about our local organisation in their countries.

Even the MDS experts disagree on the choice of treatment

Friday afternoon, a panel of MDS experts was confronted with real-life patient cases from Aarhus University Hospital, Odense University Hospital and Rigshospitalet with information served as the treating doctors got them along the way during the course of the disease. The participating experts were Dr. Aristotle Giagounidis (Germany), Dr. David Bown (UK), Dr. David Steensma (USA), Dr. Eva Hellström-Lindberg (Sweden), John Bennett (USA) and the moderator Dr. Moshe Mittelman. The individual patient pathways were presented to the panel by doctors from the Danish hospital involved, and then the panel had to decide what the next step in the treatment of that patient should be.

It became an extremely instructive one and a half hour when, as a patient representative, my eyes were opened to see that the decision as to which treatment a given patient should have was not as black and white as one believed. There were many shades of gray. And often there was a great deal of disagreement among the members of the expert panel. It was really felt that the MDS experts dealt with the information as it was their own patients. And the conclusion was that MDS patients were not treated the same way in Boston, Leeds and Stockholm.

First, MDS doctors got IPSS – International Prognostic Scoring System. It was back in 1997. It contained four forecast levels: low, intermediate-1, intermediate-2 and high, and was used for more than ten years. Then in 2012 came IPSS-R. It contained five prognostic levels: very low, low, intermediate, high and very high, and was based on the cytogenetic category, percent blasts in the bone marrow, hemoglobin level, platelet level and neutrophil level. And at 15. Int. Symposium on MDS in Copenhagen Elli Papaemmanuil talked about the next version of IPSS, which is expected to be completed by the end of this year or beginning of next, and which, in addition to the elements included in IPSS-R, will also rely on results from gene sequencing . The chart is from an article that actually discusses how molecular information can be used (From article in Blood 2015 126: 607).

All of these prognostic systems are based on the patient’s status at the time of diagnosis, and cannot be used formally at a later time in the patient’s course. Yet I noticed that this was exactly what the international experts did on Friday’s panel discussion of various Danish patients. So practice takes a little light on the theoretical basis.

It became very quiet in the big plenary hall when Dr. Lone Friis Thursday afternoon presented the results Rigshospitalet had achieved with a new combination cocktail of drugs for pretreatment of MDS patients who were to undergo an allogeneic hematopoietic stem cell transplant. She could tell about 1 year survival around 87%. And this despite the fact that more MDS patients had been transplanted in the last 3 years than in the periods compared, and the persons who underwent a transplant both had become significantly older and had more diseases besides MDS than the patients in the periods compared. with.

The figure from Be The Match shows that the reported 5-year survival for MDS patients who had undergone a transplant was about 33%. Rigshospitalet currently only has data for the 3-year survival, but that is above 70%, and with a curve that is very flat during the third year. The other figure also from Be The Match, however, shows that there has been an improvement in the 2-year survival from about 38% to about 53%. Still far from the results Dr. Lone Friis presented. The two figures are from the website Be The Match https://bethematchclinical.org/transplant-indications-and-outcomes/disease-specific-indications-and-outcomes/mds/ 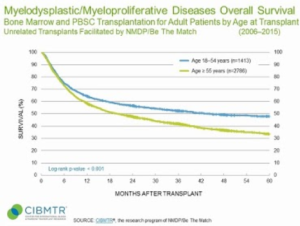 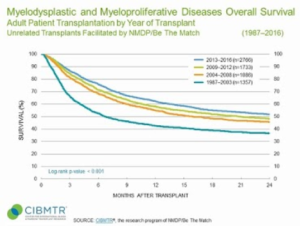 The rest of the symposium in headlines

This session dealt with topics such as: What is the mechanism of TET2 epigenetics in myeloid cancers? How does TET2 loss reshape the binding regions of HMGA2 and promote the development of MDS? What is the relation between epigenetic therapy and the immune system? How does SRSF2 P95H initiate myeloid bias and myelodysplastic / myeloproliferative syndrome (MDS/MPN) from hematopoietic stem cells? What is the epigenetic regulation in MDS / AML?

This session focused on issues such as: What is the origin of relapses in MDS / AML? What is the effect of clonal hematopoiesis in solid tumor patients on clonal evolution and risk of therapy related leukemia? Is there a genetic algorithm for treatment of MDS?  Can one develop a leukemic stem cell signature-based scoring system for predicting prognosis in Myelodysplastic Syndromes? (N. Jensen remark: That paper should properly have been rejected by the organizers) How does quality of life impact decision making in MDS?

The session ended by with panel debate among the presenters Liran Shlush (Israel), Elli Papaemmanuil (USA) and Reinhard Stauder (Austria) and to other doctors Ghulam Mufti (Great Britain) and Jean-Pierre Issa (USA) on whether there is a role for personalized medicine in MDS.

In this session, issues related to the immune system were discussed. Such as: What is the role of myeloid suppressor cells in MDS? Can artificial intelligence for flow cytometry data analysis in suspected-MDS enable an accurate, objective and fast diagnosis? Is immune dysregulation in MDS an organized mess? (Is MDS a disease between autoimmunity and autoinflammation?) Does treatment of myelodysplastic mice with Luspatercept promote erythropoiesis and bone homeostasis?

Modulating the immune system in treatment of MDS

This session focused on treatments of MDS that affected the immune system, for example: Should one combine hypomethylating drugs and immune checkpoint inhibitors? How are the adherence to treatment recommendations according to Italian and European guidelines in MDS patients in Italy? Will oral vitamin C supplements for blood cancer patients treated with azacitidine normalize plasma vitamin C levels and cause epigenetic changes? What trials are underway on vaccination with MDS / AML? Is there a consensus core outcome set for treatment of myelodysplastic syndromes? Does CAR-t have a potential in myeloid cancers?

This session was about hereditary MDS and sought answers to questions such as: What gives genetic predisposition to MDS? What are the mechanisms of SAMD9 and SAMD9L mutations in myeloid malignancies? What is pediatric MDS? Ethical question: To do or Not to do?

This session was about CMML, which is a blood cancer, but is not MDS: Can preclinical models of CMML (TET2 / NRAS) tell about sensitivity to MAPK inhibitors? How is CMML including RAS mutated patients treated? What are the molecular characteristics and clonal architecture of MDS / MPN in adults? What are the long-term survival results and prognostic factors for high risk myelodysplastic syndrome / chronic myelomonocytic leukemia treated with guadecitabine? 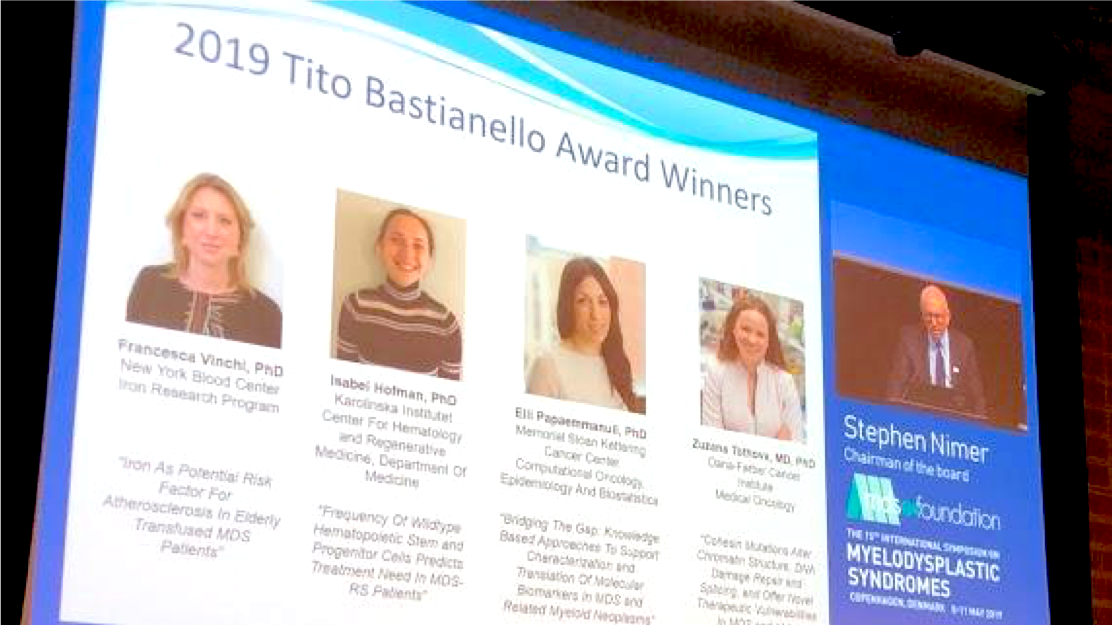 Francesca had investigated iron as a risk factor for atherosclerosis in elderly transfusion-dependent MDS patient’s. Isabel had studied the frequency of wild hematopoietic cells and stem cells predicting treatment needs of MDS-RS patients, Elli had studied a knowledge-based methodology for characterization and interpretation of molecular biomarkers in MDS, and Zuzana had investigated how cohesin mutations alter chromatin structure, DNA damage repair and splicing, and open new vulnerabilities in MDS and AML.

Tito Bastianello, whom this award is named after, was diagnosed with MDS in 2001, at a time, when there were no treatment options other than blood transfusion and, in rare cases, a bone marrow transplant.

Participation in a symposium, like 15. Int. Symposium on Myelodysplastic Syndromes in the Tivoli Hotel & Congress Center in Copenhagen over 3 days is not cheap. The registration alone costs almost DKK 5.000, and it is not something you just pull up your pocket. But in the autumn of 2017, chief physician Kirsten Grønbæk asked in LyLes closed facebook group for MDS patients who were interested in following her research on epigenetics and targeted treatment, such persons are normally called ‘patient advocates’ (we have yet to come up with a good Danish word). Three people signed up: Marika, Pauline and Niels. We were all offered to participate in MDS 2019 in Copenhagen. But when you are on the labor market, it is difficult to tear 3-4 days out of the calendar to go to Copenhagen. So we were only two Danish MDS patients who participated in the symposium, Pauline and I. It was a really good experience.

The 16th Int. Symposium on Myelodysplastic Syndromes is planned to be in Toronto, Canada in May 2021. And since my wife is from Canada, it is not unlikely that we choose to combine my participation in the symposium with a family visit in Ontario.